Mid-Drives - A Disaster for Trikes (Blind Leading the Blind)

Mid-drive technology for bicycles and trikes is a step backwards for humanity. The only reason it exists today is that a "Big Company" became a strong proponent and manufacturer of it. It has no business in the bicycle world and no place in the trike world.

We cannot let "big companies" kill innovation because of their deep pockets and prior brand history. We intend to stop this nonsense and continue to fight against big companies and "innovation killers."

The Significant Disadvantages of Mid Drives:

Where should I start? The list is virtually endless.

I have not even discussed the warranty, expensive repairs, return on investment and a very limited life time of mid-drives. It is truly a shame that such a concept is allowed to exist in the market place.

So, what does a mid-drive system bring to the table exactly?

Mid-drives can be made smaller by continuing to spin the motor to higher and higher speeds. This significantly shortens the lifetime of all the mechanical parts. Nevertheless, in a mountain bicycle, they help to keep the weight lower in the middle of the bike. Therefore, we have better stability while hill climbing.

So, what does a mid-drive system bring to a Trike exactly?

This is "the Blind" leading the sheep or should we say the Wolf leading the sheep. The sheep want the security of a big company. They could care less about technology or innovation or what is right for the end user. Their goal is to follow the herd and be "Safe."

Which is more stable? 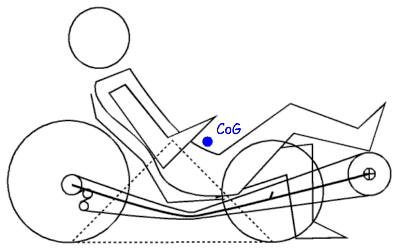 Center of Gravity for a Tadpole Trike without any eBike System

In the article at jetrike.com, the author talks about the dynamic behavior of a tadpole trike. The author states:

“The tadpole rider's CoG is lower but located ahead of the forward tipping axis so it would tip forward under a 1g braking force. With modern caliper brakes, this would tend to lift the rear wheel. On a downward slope the tipping threshold would be even less, exacerbating the problem.”

Intuitively, one can conclude that having a direct drive motor actually improves the stability of a tadpole trike. The mid-drive motor will add significant weight to the front boom exacerbating the stability issue. The figures below illustrate this in a better fashion.

IBM used to be the target of Steve Jobs when Mac was launched. And for several years the Wintel consortium could not deliver the key technologies. They copied and copied and took several years to reach Apple's product performance and elegance or Wait, Have they?

Here is the bad news. We cannot make a Lion out of a Donkey. Can we?

A mid-drive technology can never integrate into a virtual reality technology platform such as Zwift. Only Falco's eDrive has that capability. Have a look.